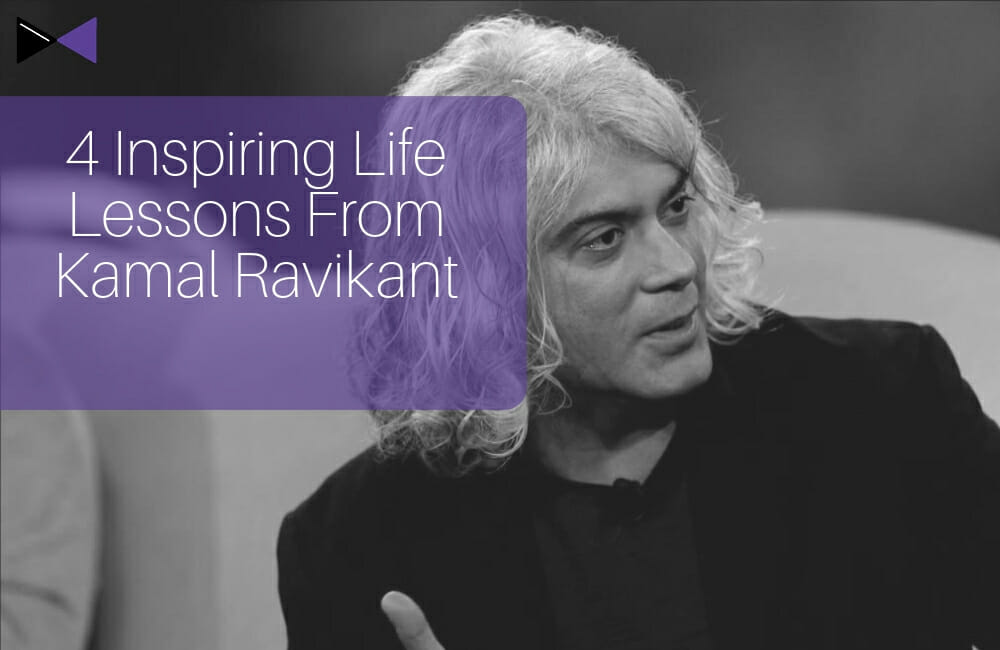 Finally, the moment had come. I’d been angling for this for months…

It began with emails. Then, weekly text messages. We’d got it on the calendar a few times, but one thing after another cropped up.

But this time… this time we’d get it done.

Late at night and weary-eyed, be damned.

I opened my laptop, turned on Zoom, and after a few minutes wait, he joined me.

I’d followed Kamal Ravikant for sometime. I came across him, I think, via James Altucher. I can’t recall when or why I bought ‘Live Your Truth’ when I did. What I can say is, when I did read it… it changed me.

One of those books that smacks you across the face. Leaves you wanting more. Has a lasting impression on you. Seems to open you up and rip out your insides. Makes you feel. Makes you hurt.

A short book, I read it cover to cover in a single sitting. I’d only previously done this with one other book: The Perks of Being a Wallflower. In the weeks that followed, I read ‘Live Your Truth’ a further two times.

I read his other book, too: Love Yourself Like Your Life Depends On It.

I eagerly awaited his first novel: Rebirth, a fable about finding yourself in a chaotic world.

I loved them all. So, when I finally got in touch with him and he agreed to chat with me — so I could interweave him and his character in my own parable — I let out a ‘fanboy’ yippee.

Yet then the waiting came. The ‘try me next week’. A busy dude. An in-demand dude. A dude working on his own book, and one, which I learned while on my call with him, a dude who doesn’t give a fuck.

Within minutes of being on the phone with him, my nerves rattled up a notch or ten. I’ve only done 250+ interviews before this. It should have been just another call, but it wasn’t.

In his books, I found something in his words that I didn’t get from most others.

I wanted to unravel more, and pick at his thread. Learn more about the guy behind the inspiration. Learn more from the guy whose mind conjured it all up.

I didn’t know what to expect, and I assure you… I didn’t expect the guy I met.

On our call, I felt on the back front from the get-go. I didn’t feel equal. I didn’t feel like we were on the same level. I felt fucking nervous. I have a sense I let this known.

Yet, none of this was on Kamal.

All of this was on me; I just didn’t quite understand it at the time…

I do, now. Having spoken to him. Having sat on our conversation, and thought about what he said. Having written about him, and interwoven his unique self into my novel. Having reflected on myself and my own unique ways, I appreciate the inspiring life lessons I’ve picked up from him, our talks and his books.

In truth, many more to be had.

But four will do, for now.

This was one of the first things he said to me.

“Dude, you have to ask better questions.”

I always thought I did. I had interviewed a lot of people. I thought I was, at worse, okay at asking them. But there I was, swotted to the floor like a moth.

Of course, it wasn’t out of spite or ridicule. It was a mere honest reflection of life overall.

Be it a literal question or not, you get what you give.

“People want the answer,” he said, “but the real answer is more incisive.”

I was asking him about success, and what it means to him. But I could have asked him about anything. Without being specific in your question / goal / idea / focus, you likely won’t get what you want.

We want detail, but are only willing to give a rough sketch.

I think that’s because asking a “real” question is hard. The real questions rest below the surface. You must dig for them. You must look at yourself. You must understand what you really want.

That’s uncomfortable. So, we resist.

We ask broad questions, and hope someone gives us a detailed answer.

When you think that rationally, it makes no sense.

2: Other People Do No Matter

“Don’t give a fuck about anyone else,” he said. “What they say to you, what they think… it doesn’t matter; they don’t matter.”

But it’s true, when you think about it.

“Your only job is to make yourself better than you currently are,” he continued.

This stuck with me. Because I am a man who likes to make out he doesn’t care what others think. The way I dress, and how I have a funky moustache… it tells people, “I don’t care what you think.”

I have a chip on my shoulder.

I care what other people think.

And this pisses me off.

It’s likely why I dress the way I do, and have a funky moustache…

When I asked Kamal what he would tell his younger self, this is the advice he offered. Don’t care what they think. Don’t base who you are on their thoughts and whatever. It doesn’t matter. They, do not matter.

All you can control is who you are; what YOU bring to the table.

Everything else… it’s noise.

“If there is one lesson I’ve learned from failure and success, it’s this. I am not the outcome. I am never the result. I am only the effort.”

This is the quote from ‘Live Your Truth’ that hooked me.

How often do we commit focus, energy and thought to an outcome we don’t control. How often are we get angry, stuck in traffic; or frustrated at what someone else has said or forgotten to say..

What about the time you forget something, and berated yourself?

We obsess over the outcome. We want a result, even though we may not be able to guarantee it.

Somebody else plays a role.

Often, lots of other bodies do.

Yet we trick ourselves into thinking we can guarantee it or change it. We strive for the outcome, and forget about all other rationale. If we don’t reach it, we’re a failure. Even if we do, it doesn’t matter because we now have another goal… a higher summit to reach… a trickier challenge to complete.

Yet, come the darkness of night, all you have control over is the effort you put in.

4: Fear is a Natural State.

Toward the end of our call, the subject turned to fear.

Fear is as natural as any other feeling.

Feeling it is part of being human.

“Fear is the shadow of love,” he continued. “Know that it’s the truth, and let go of it.”

This itself is scary; to accept fear is real, and always will be.

My kids, I love them. With all my heart. Yet, they also terrify me.

Fear… the shadow of love. The ying to your desire’s yang.

But like the outcome before it, you do not control this. You cannot vanish fear. Doing so is only masking the truth. And as Kamal’s book suggests, we must Live our Truth.

Our call overan. By the time we finished, it was way past my bedtime.

Yet I didn’t feel tired. My chest beat with a frenzy, partly because he put in my place and said what he wanted to say. But more so, because I knew I would take a lot from our call.

In the same way his books did, our conversation lingered as my mind wandered to wayward thoughts.

Four inspiring life lessons that taught me a great deal about me and my life; how I think, react, act and more. I am human. I am not perfect. I am far from complete, or within reason at all times.

The final lesson he gave me was the reminder he’s a man, just as I am.

If he stands on one, it’s only because I place him there.

He’s as human and imperfect as me, and I cannot give a shit what he thinks. All I can care about is me, and the man I am and continue to become.

… and asking specific questions that do not reside on the surface.

What does all this lead to? I have no idea. But seen as Kamal wrote a few books about self love and self acceptance, maybe that offers a hint to where this wisdom journeys toward.

** Kamal appears in my latest book, a parable about what it means to escape the hustle, learn to love yourself and build a life that truly means something. If you want to learn more about it and dive into Kamal’s Inspiring Life Lessons, click here ==>